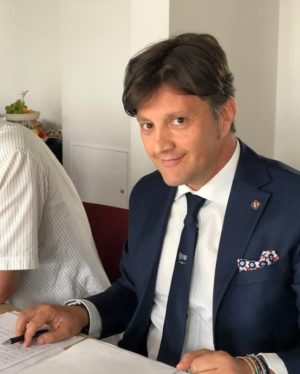 Carlo A. Bordini, was born in Reggio Calabria (Italy) on 27th August 1973. Carlo starts playing draughts at 13, and in 1987 becomes a Italian Champion Junior of Italian draughts, specialty of which he is master. At the age of 18 he began to be a Trainers of draughts, and his boys has obtained several successes at the Italian Championships and at the Student Games. National Referee, in 2001 he became member of the FID national Board. From 2002 to 2016 he was elected again member of FID National Board, assuming the charge of FID vice-president. Since 2015 he is vice president of the WCDF (the World Confederation of Checkers/Draughts, English speciality) and in 2016 he is elected President of the FID (Italian Draughts Federation). In 2016, he was awarded of the Golden Star for Sporting Merits by the Italian National Olympic Committee.

Married, engineer, from 2002 he moved to Milan for work and from December 2008 he moved for work to Trieste.

On 3rd August 2019, in Warsaw, he was elected President of the EDC.